Visit BCN / Christmas with the family

Christmas with the family

Here's the long list of activities we've lined up so the kids can explore, have fun, learn and celebrate Christmas in Barcelona with city trails, lights, art, workshops and magic. 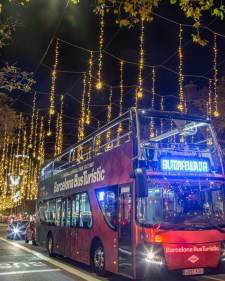 If you want to see every detail of Barcelona's dazzling Christmas lights, the best thing to do is hop on board the Barcelona Christmas Tour. As you ride through the streets, past iconic buildings that are all looking their finest for the festive season, you'll learn lots of anecdotes and curious facts about the city and Christmas.

For yet another year, the Recinte Modernista de Sant Pau in Barcelona will be transformed into L'Univers de la Llum (The Universe of Light), a magical trail, full of colour, featuring 21 light installations along a route covering more than 1 km. Screenings, sensory tunnels, large-format planets and stars await you so that you can discover every corner of the art nouveau landmark. 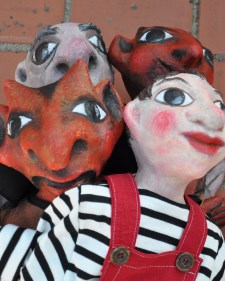 Turrón and puppets at Pedralbes Monastery

In the captivating setting of Pedralbes Monastery in Barcelona, the magic of Christmas will permeate every arch in the cloister to bring you two activities for the kids to enjoy. Micro Troupe will be staging Barrabassades de Nadal (Christmas Mischief), a puppet show that will invite you to take part in the story with games and

elements from Catalan culture, such as the fire-running festival, the correfoc!

The sweetest way of celebrating Christmas also awaits: a workshop where the kids will learn how to make the two main Christmas sweet treats: tubular wafers, or neules, and turrón nougat. We know that the monks were making turrón at the monastery as long ago as 1376. The original wooden tongs for shaping the wafers survive today, as proof of the monastery's culinary tradition. 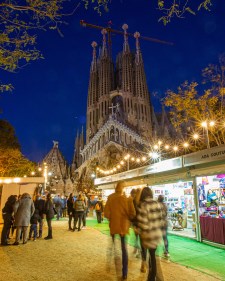 Christmas Markets and Fairs where you'll find the best decorations

It's Christmas in Barcelona on the day the Christmas lights are switched on. And, in every home, it's Christmas when people put up their decorations! You'll find neighbourhoods with their own Christmas markets where you can hunt for the figures you need for the crib.

In the city centre, you'll find some of the most popular ones: the Fira de Santa Llúcia, in front of Barcelona Cathedral and the Fira de la Sagrada Família, in the
imposing shadow of Gaudí's basilica, and the Epiphany fair, the Fira de Reis, on Gran Via, with countless stalls stretching through the left-hand side of the Eixample district.

Two nativity scenes you must see

If we put together the words nativity and Barcelona, the annual nativity scene in Plaça Sant Jaume springs to mind. It is the most popular one in the city and has a different, innovative design every year with something to please traditionalists. If you're looking for a truly traditional nativity scene, a few metres away from the square, the Museu Frederic Marès, creates its own giant crib. This year it will depict an idyllic valley in the Catalan Pyrenees and their foothills, with mountains, villages, plants and animals. Look closely at the details of the vegetation, which has been created by students who have studied floral art at the entertainment and creative industries school, the Casa d'Oficis de l'Espectacle.

This is the spectacular centrepiece to Christmas in city: from 17th to 30th December, Plaça de Catalunya will be hosting a whole host of festive events from morning to night. For a fortnight, the plaza will be a sea of creativity and originality with street art, all kinds of music, circus performances with amazing stunts, activities to get your body moving, workshops where you can get your hands dirty and interactive installations. You'll find seven areas running morning workshops where the kids can create postcards, build wooden cities, put on fancy dress and make-up, or perform in a play. You can also enjoy midday comedy sessions that will have all the family in stitches, afternoons full of rhythms and live concerts, entertaining street art and evenings featuring a performance combining circus and opera, La Torre de Nadal (The Christmas Tower). The kids will be agog!

The Plaça de la Universitat will also be buzzing! Make sure you visit and explore the immersive installation Solstice, interpretations of the winter solstice under the prism of the digital arts brought to you by the digital arts and design platform OFFF Barcelona. This playful experience invites you to celebrate the winter solstice by immersing yourself in a forest of screens. Inside you'll be able to see creations by different artists, ranging from 3D animations and generative art to light projections, animated illustrations and films being shown on screens. It's a creative universe that will take your kids' breath away. 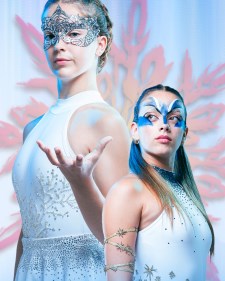 Christmas at the Poble Espanyol

From 3rd December to 5th January, this charming little village on Montjuïc hill will be transformed into a Nordic landscape… resembling Lapland! It will be decked out with special decorations and you'll be able to visit Father Christmas's workshop and the Three Kings' house where the kids can hand in their letters. You'll also be able to see the dance, theatre and acrobatics performance Winter, starring young dancers and brought to you by 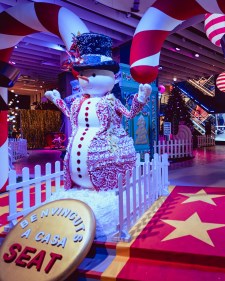 This Christmas, the CASA SEAT will be more glittering than ever. The chef Christian Escribà has created a sugar-craft world of three-dimensional figures to recreate a Christmas village and toy factory. Once again, the façade of the building will be transformed into a giant advent calendar that will reveal a surprise every day.

Christmas in the old harbour

At Christmas time in Barcelona we exchange snowflakes for the waves of the sea. From 5th December to 6th January, the old harbour, the Port Vell, will be holding a big Christmas fair on the Moll de la Fusta quay which has become one of the festive season's main events. You'll find decorations that are a blend of Christmas and the Mediterranean, state-of-the-art technology, activities for the kids and food to warm you up, a vintage merry-go-round and a miniature railway, all designed to ensure you experience the thrill of Christmas to the full. There will also be entertainments, an environmentally friendly synthetic ice rink and many more activities. 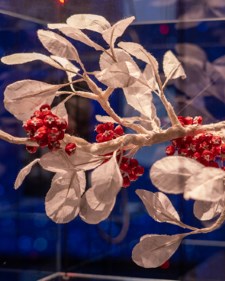 Views and origami at the Glòries Tower

It's time locals and visitors alike discovered this iconic landmark that is such a distinctive part of Barcelona's skyline. The Glòries Tower viewing point is now open and will be the setting for a special programme of events designed with kids in mind. You'll be able to visit the exhibition Barcelonins (Barcelonians) and its special

decorations featuring creations by the origami artist Joan Sallas. The artist will also be holding morning workshops where you can learn how to make paper

kites that will make you dream and fly through the Barcelona skies.

After a Christmas full of surprises, the final guests arrive in the evening of 5th January: the Three Wise Men from the Orient. As tradition dictates, Melchior, Caspar and Balthasar come into the Moll de la Fusta quay in the harbour on board the schooner Santa Eulàlia and climb aboard their floats to greet all the kids in the city. They parade through the streets in the city centre with entertainments and their retinue in tow in a true spectacle of light and colour. This year there will be new performers and parades. The floats will also be new, less polluting but just as spectacular. Get ready for one of the most exciting moments of the festive season!