Barcelona's bars, bodegas and vermuteries are examples of the most authentic side of the city and give you the chance to enjoy the time-honoured Barcelona tradition, known as fer el vermut, in special surroundings. Some of them have been in business for over a century and many are truly unique.

Fer el vermut is much more than tasting a product or having an appetizer and a drink; it is a social event and the perfect excuse to meet up and share, to whet your appetite before lunch, to enjoy the city's alfresco terraces throughout the year. Because the Catalan capital also has the perfect climate that allows you to sit outdoors and enjoy the open air 365 days a year.

The Casa Almirall is one of Barcelona's oldest bars. This is borne out by its Catalan art nouveau, or modernista, décor and wood and marble fixtures and fittings. It is also a living witness to the peaceful atmosphere of bohemian life in 19th-century Barcelona. The bar has been a favourite meeting place for locals for more than 150 years and is divided into two areas: one that is exactly the same as it was when the bar opened and another with low tables and comfy armchairs. In addition to its wide range of drinks, its tapas make it an absolute must for any vermut aficionado. Make sure you order its potato omelette – truita de patates – which is one of the best in Barcelona.
Address: Joaquim Costa, 33

Winner of the 2020 Vinari award for the best vermuteria

Las Vermudas has the fun and relaxed atmosphere of a social club where you'll feel right at home. It is renowned for its huge variety of vermouths from around the world, which are served in many different ways, such as in their cocktails. They are also paired with tapas and small tasting platters accompanied by live music. Their main premises are in Gràcia, but they also have another outlet in the Sant Antoni neighbourhood.
Address: Robí, 32 - Calàbria, 3

-Winner of the 2019 Vinari award for the best vermuteria-

The Bar Calders is located in an alleyway named in honour of the Catalan novelist, Pere Calders, near the bookshop, the Llibreria Calders. The combination of the two makes this one of the most interesting spots in Barcelona. The bar has an extensive range of vermouths from Catalonia and beyond. They can be enjoyed with gourmet tinned produce as well as items from its tapa and tasting platter menu, which will make you decide to linger and combine vermut with lunch.
Address: Parlament, 25

This is one of Gracia neighbourhood's most historic bodegas. It opened in 1916 as a grocers shop and eventually became a wine shop and bar frequented by the locals. Lunchtime is the perfect moment to visit. Its wide selection of bottles from Catalonia and beyond that line the shelves, and the new tapas served by owners Luis and Vanessa, make it an absolute must. It is a small, cosy spot that will delight the tastebuds of anyone wanting to have a vermut at a time-honoured bar.
Address: Milà i Fontanals, 72 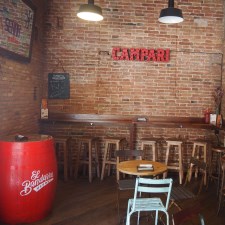 -Winner of the 2018 Vinari award for the best vermuteria-

Senyor Vermut is run by the Miralles family and its name leaves us in no doubt about the house speciality: vermouth, with a splash of soda water if you like, and all kinds of snacks and tapas. The bar serves a wide variety of vermouths and is the perfect place to try out some new ones. The patatas bravas (deep-fried potato chunks served with a spicy sauce), are one of its best-kept 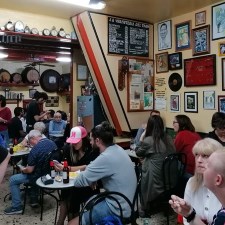 -Winner of the 2017 Vinari award for the best vermuteria-

"We start assembling our tapas at noon and keep going until 9pm", Tano, the owner of this authentic Gràcia vermuteria, tells us. As you would expect of such a long-established bar, its concept is simple and traditional: "We serve the same vermouth we've always done. In small glasses, with no ice, no olives, slices of orange or lemon. But it's always well chilled". A regular haunt for Gràcia locals.

We serve the same vermouth we've always done. In small glasses, with no ice, no olives, slices of orange or lemon. But it's always well chilled.

The Rufián is one of the most popular bars in the Poble-sec neighbourhood, because of its lively atmosphere and the great food its serves. Over the years, it has become a go-to place for vermut aficionados, not just because of its vermouths but because of its tapas and live music. Depending on the day of the week, you may come across one of its themed or fancy-dress parties, which make it one of the city's most fun places to be.
Address: Nou de la Rambla, 123