All of Gaudí in a single day

The Casa Batlló, La Pedrera, Sagrada Família and Park Güell visitor package gives you the opportunity to visit four of the architect Antoni Gaudí's best-known landmarks on a scheduled tour in different languages.

During the first half of the tour, you'll walk along Passeig de Gràcia, one of Barcelona's most important avenues where you'll find many of the Catalan art nouveau, or modernista, buildings of the day. The visit includes a tour of two of Gaudí's most iconic landmarks, the Casa Batlló and La Pedrera (Casa Milà). The guide's descriptions will be placed within the historic context of the city and refer to other architectural landmarks of the period.

After the tours there will be a three-hour break for lunch. The group will then reconvene at the Julià Travel office next to the Sagrada Família.

What does your booking include?:
For further information see details and map
PURCHASE Fast-track entry: Batlló, Pedrera, Sagrada Família and Park Güell 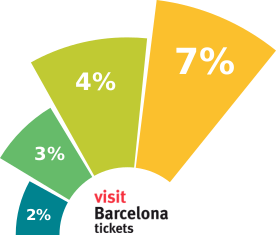 Save while you shop!

With a minimum purchase of two non-discounted items you can accumulate a discount of up to 7% in your shopping basket.Make the most of our discount scale: two products, -2%; three products, -3%; four products, -4%, and five products or more, -7%.
See the terms and conditions of the promotion.